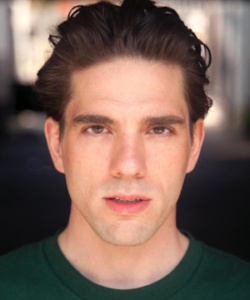 Ian’s Dad’s side hails from East Wall in North Dublin but they emigrated to Coventry in the 1950’s. His Mother’s side are Scottish, from deepest Glasgow.

As an aspiring singer from a young age, Ian left home at 16 yrs old. He gained a full scholarship to Masters Performing Arts College where he trained under the guidance of Wendy Headford for 4 years.

In 2015, Ian was nominated for an Olivier Award for Best Actor in a Supporting Role for his portrayal of Barry Mann in Beautiful: The Carole King Musical (Aldwych Theatre) – a role he created in the West End.

Film: Ian recently played the role of the Aneasthetist in the film adaptation of Roald Dahl’s Matilda the Musical (Netflix).

Workshops: Hugo’s Father in Hugo; Frank Sinatra in Sammy the Musical; Irving Radovich in Roman Holiday (London & Shanghai); Pip in The Navigator; Pink’s Father in The Wall – Pink Floyd Musical; Nick in The Famous Five; Michael in The Canary Girls.

Ian is excited to return to Roddy Doyle’s The Commitments and feels it’s a privilege to be taking on the iconic role of Deco Cuffe again, a role he previously shared with Killian Donnelly in the original West End production at the Palace Theatre, London.