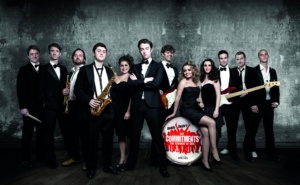 The West End cast have now been announced. Denis Grindel makes his West End debut in the leading role as band manager Jimmy Rabbitte. He’ll also be joined by West End star Killian Donnelly as the infamous Deco, and an exciting cast of young newcomers whose talents will soon be discovered when the show opens at the Palace Theatre on 21 September.

Roddy Doyle, who has adapted the show from his original novel, said: “I’ve been sitting in rehearsals, watching these terrific young people becoming The Commitments, and it all makes me very happy and excited. What amuses me most is the fact that only one of them was born when I wrote the novel.”

A Star is Born!

The show will close in the West End on Sunday 1 Nov.

Sunday Night at the Palladium

The Commitments rocked Sunday Night at the Palladium.

CLICK HERE to watch on the ITV Player, including a performance with presenter Alexander Armstrong.