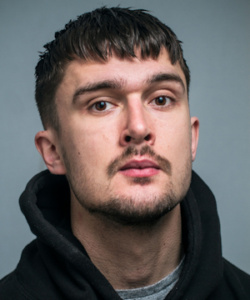 Ronnie trained at The Italia Conti Academy of Theatre Arts.
During his training, Ronnie was selected to perform at the Sam Wanamaker festival 2017 at Shakespeare’s Globe Theatre playing Richard the third.

Since completing his credits include:

Richard Burbage in Will Or Eight Lost Years Of Young Shakespeare’s Life at the Rose Playhouse, for this part he was nominated for an Off West End award for Best Supporting Male.
Ferdinand in The Tempest with the Lord Chamberlain’s Men which toured across the uk and Europe.
Pete in Not Quite Jerusalem at the Finborough Theatre.
He played the title role in Macbeth with The Lord Chamberlain’s Men which toured the UK and Europe.